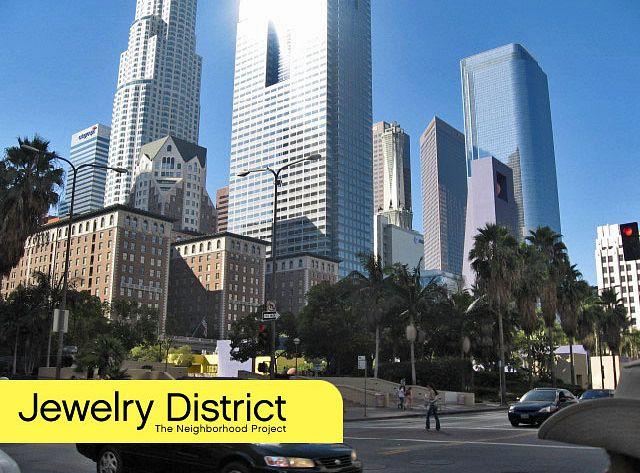 The Jewelry District is located over the span of several blocks in downtown Los Angeles, between 5th Street and 8th Street. Though now it is located in what we call “downtown,” this district was originally at the center of the city. When it formed in the early 20th century, this part of the city overlapped with the city’s “Historic Core” district, then the center of LA.

Most of the buildings in the area are architecturally dazzling early 20th century buildings. These art deco style buildings were designed to have office spaces on the upper floors and retail spaces at the street level. The retail spaces were the choice for two of Los Angeles’ earliest jewelers to establish stores, Laykin Diamond Company and Harry Winston & Co. Other jewelers quickly followed suit and these retail spaces became filled with the largest array of jewelry stores in the country. The area became a hub of world-class fine jewelry.

The Jewelry District has thrived throughout Los Angeles’ development. In particular, it experienced a huge growth boom in the 1960s when public interest in buying gold dramatically increased. The district has slowly grown to be known as a leader in fine jewelry, jewelry marts, bridal marts, and wholesale jewelry, in Los Angeles and around the world. The long life and rich history of these few square blocks have made the LA Jewelry District one of the most historic parts of the city.

Today, the Jewelry District of Los Angeles is comprised of nearly 5,000 businesses. It is the leading jewelry district in the United States. Because of the huge array of different types of fine jewelry still sold in the district today, it remains a go-to destination for anyone shopping for jewelry.


Gold Empire Jewelry has been a staple of the LA Jewelry District since it was opened in the historic California Jewelry Mart in 1978. Our mission from the beginning has been to deliver high-quality jewelry at a great value. Our excellent relationships with numerous diamond importers allow us to obtain high-quality diamonds at phenomenal prices. Our team of expert jewelers and artisans also specialize in customizing engagement rings. Make an appointment with us to begin the creation of your dream custom engagement ring. We provide our customers with diamond engagement rings at great prices.The excellent value of our diamonds has earned us a spot as one of the noted Diamond District jewelers of LA. We are committed to having only the best diamonds for the best prices at our store.